Paddy reflects on some memorable documentaries.


Rally to Win                      This was one of many sports films sponsored by WD&HO Wills and, in this case I think, Ford of Britain.  It featured the Ford Motor Rally Team in the days of the Escort Mk Is and the great Roger Clark, with a great deal of input and comment from Stuart Turner, Ford's Motorsport Manager.

I would go into United Motion Pictures and view rushes or rough cut footage which crews had shot and then go away to work on a structural outline and commentary.  I'd then sit for days with editor Brian Llewellyn as we reconciled pictures and words to make a coherent documentary.  It won a prize at the Cortina Sports Film Festival.

From Harrogate it Started                             This was the story of the 1971 Royal Automobile Club International Rally of Great Britain.  Our having made a number of RAC Rally films with a conventional commentary, I suggested to Brian, now directing as well as editing, that we made this one an impression of the event rather than following the traditional newsreel style.  We used natural sounds and had no formal narration but told the story, as and when needed, by snatches of interviews, overheard conversations and radio news items and comment, some existing and some scripted by me and recorded by BBC presenter Night Ride Bruce Wyndham.  We also had the extraordinary bonus of free use of The Who catalogue, as the group were rally enthusiasts and had sponsored a car.  A highlight is a special stage sequence, masterfully cut by Brian to "I Can See for Miles".  I think we won several prizes for that one.

British Tourist Authority films for Japan                        Geoffrey Hamilton, the British Tourist Authority's Tokyo-based charismatic manager for South East Asia, had the brilliant idea of bringing Japan's most high-profile showbiz married couple, Hiroyuki Nagato and Yoko Minamida, to the UK for a holiday and have a film crew record their tour.  While his budget would have been emptied by one national TV commercial spot, having these stars on board meant that the TV networks would vie to air a documentary-length programme.  The couple were a pair of totally delightful workaholics for whom a holiday being whistlestopped in a Rolls Royce around a prime selection of the nation's sights with a hand-picked unit in tow was a perfect formula.

They enjoyed the experience so much that they came back twice more and I was fortunate enough to organise the filming for Gillie Potter Productions in all three years.

North Sea Engineering          Robin Jackson had directed the first of the BTA Films and he recruited me to work with him on a major project for the prestigious Shell Film Unit, a documentary to record the massive effort taking place all round the North Sea basin to build the hardware and structures for extracting the oil that exploration had now pinpointed.  For many months we kept track of progress on pipelaying and the construction of production platforms and storage facilities both off and on-shore.  Engineers would alert me to the approach of significant stages and we would either go with a crew to cover the action, or send crews, dependent upon the importance or the complexity of the event.

Much of what was being attempted was pioneering engineering – doing things never before tried and stepping into the unknown at times.  We criss-crossed the sea and ranged along the coastlines of five countries using airliners, supply ships, seaplanes, helicopters, minibuses, hire cars and taxis, covering launches, floatings, toppings out, mammoth tows, giant lifts and tense, sometimes protracted manoeuvres, with waits for weather, tide, or just for technology to catch up.


Shell  -  Natural Gas                  Another Shell Film Unit documentary with Robin Jackson, this time telling the story of natural gas from exploration in the Borneo jungle to its transport across oceans in giant tankers to its use for heating housing complexes in Tokyo.


Fly Me to the Bank                This was a documentary for the Midland Bank, now HSBC.  Feature director Clive Donner was in charge of this one and it was all filmed at Heathrow Airport, never the easiest place to shoot, especially with actors, but where the experience was for many years smoothed by the wonderful Flo Kingdom of the British Airports Authority who tolerated no fools but was a tremendous ally to those like Clive who knew what they really needed and were organised.  Highlights included covering the early morning landing stream from as close to the runway as we were allowed – and going out with the runway "Checker" team in their Land Rover.

Al Fau                  Probably not many universities could afford to employ a proper documentary company for an extended period and certainly not many individual departments would have such resources.  The Department of Archaeology of the University of Riyadh in Saudi Arabia is an exception and they commissioned Charles Barker Films to cover one season's work at their long-running dig at Al Fau on the Silk Road from Yemen near the edge of the Empty Quarter.  This involved the unit, led by director John Herbert, living under canvas for several weeks.  A demanding daily routine was enlivened by the occasional traditional feast for visiting dignitaries.  I spent a good proportion of my time though in the capital, trying to organise the film's transit to London (following the furore following "Death of a Princess") and equally organising our own escapes for the Christmas break and at the end of filming.

John had something of the eccentric explorer about him and made the unit climb the 2000' Tuweiq Escarpment overlooking the camp twice.  I had other duties on one of the days but couldn't avoid both.  The reward was a view of remarkable treeless landscape that was a vegetation-free copy of the Cotswolds, plus a profusion of prehistoric stone arrangements and a distant sighting of unbelievably enormous sand dunes. 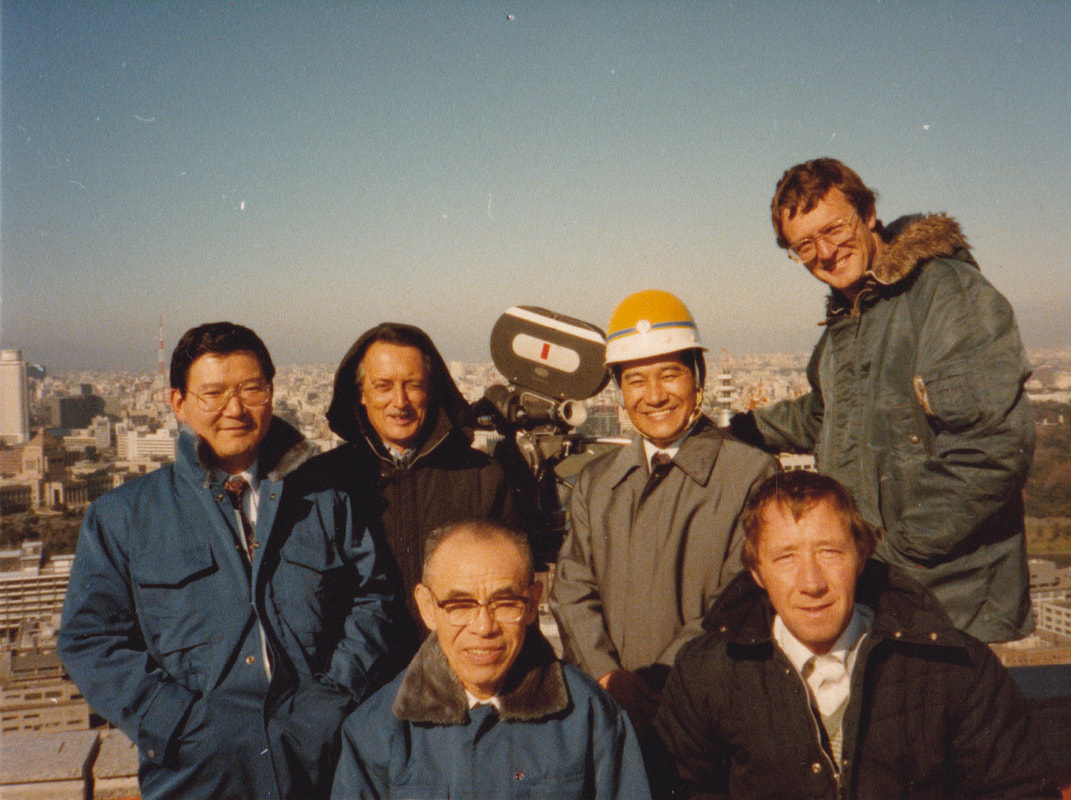